I have seen tigers before – in Ranthambore National Park as well as at Kanha and Bandhavgarh. But wonderful though it was to see these magnificent creatures, I wondered what it would be like to be away from all the other jeeps and cantors in Ranthambore. Was it becoming more like a zoo?

So it was with interest that I read about a National Park where you could experience “a real wildlife experience”. What did that mean? – particularly as it went on to say that if your idea of a vacation is to lounge comfortably with a glass of wine in hand with no insects about then this is not for you. I love tigers with but viewing them in comfort – especially enjoyed at the Taj Camps at Kanha and Bandhavgarh, though the latter was not as sumptuous as Kanha. All I wanted was to experience the viewing of tiger in a more natural setting with fewer jeeps around. And at the same time not forgo too much of the comfort.

But in search of tigers in true wilderness I was willing to give this new place a try. This was Satpura National Park – Reni Pani Jungle Lodge in Madhya Pradesh – about in the middle of India, with Bhopal being the nearest airport. There are trains from Delhi as well, whichget you even closer to the Park, but these take a long time.

My first impression of the lodge, after a three-hour drive from Bhopal, was that they had been understating it. Reni Pani Jungle lodge was more than comfortable – verging on luxury but in an eco friendly way. It blended with its surroundings but still had a pool to cool down in, and superbly comfortable lodges – each with its own butler to look after you. The outdoor shower had all the privacy needed but with views of the jungle. Nobody need have any fear of discomfort here; on the contrary I would rate this as a luxury eco lodge spread over 30 acres. So having the comfort sorted out (but I will come back to it) I was keen to explore the park for true wilderness – after all that is why I had come here.

The first surprise was that I was not just limited to going round the park in a jeep; I could instead use a boat, an elephant or even walk to explore the jungle. Apparently I could even use a cycle or a horse.

Getting to the Park entrance, accompanied by the resident naturalist, was the easy part. A boat ride across the river and we were ready. I chose jeep on the first excursion so that I could get a feel for as much of the park as possible, but on the other days I also walked and “took” the elephant. The park nestles under some low hills of Satpura etched against the sky. 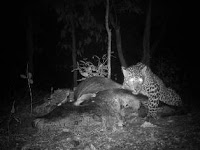 We saw a leopard, sloth bears, gaur, wild dogs, deer of many variety and even greater variety of monkeys amongst the many animals in the jungle. I am not too sure what was the highlight, seeing a leopard stalk a noisy Langur monkey or the gaur, the world’s largest wild ox that we met on our walk – a huge wild-eyed creature that looked permanently bad tempered? I am not a bird watching enthusiast but amongst the many types my personal favourite were the Malabar pied hornbills flying across the sky. Indeed this is probably one of the best parks for bird watching. The sweet flowers of the Mahua tree ferment on falling so act as the local reservoir of hooch for the birds and bears. It’s not unusual to see drunk bears sleeping off the drink – never found out if they get a hangover!

There were many other highlights including seeing a pack of wild dogs trotting down the trail on an expedition to hunt for food. We never did see a tiger though we walked along its trail for a long while. A truly enchanting National Park, still as it would have been in the days of Kipling – had he visited this one. A true wilderness meeting all my expectations for a proper jungle safari.

The first day ended with a swim at the campsite and return to the cottage to change for the sundowners and the dinner. I remembered the advice of not to stroll out in the dark as the camp is after all inside the jungle. But the butler was there to accompany me to the ever changingsites round the camp for drinks and dinner. I had to try the mahua martini. It was wonderful and I could understand why the bears were so fond of eating the fermented flowers of the mahua tree. The food was excellent – most of it sourced from the local village and totally organic. The staff too were from the village and it was nice to feel that at last there was something that was benefiting the local community and at the same time having a respect for the wilderness.

If you want to see a wildlife park in its natural state, to be able to walk it, to see and feel how a jungle would have been, in the days before us tourists, then Satpura National Park is for you. An ideal romantic holiday in the great outdoors with luxury thrown in. Better do it now before it is “discovered”. I shall be going back to Reni Pani – after all I didn’t actually see the tiger, and I do want to see it in its natural worldand not on display as in a zoo. Which of course makes the sightings more difficult, but why should it be easy! Satpura has as many tigers as Ranthambore and I am anxious that they remain shy of us humans. And I want to meet up again with the friendly, most hospitable people at Reni Pani. A truly enchanting experience.

There is also another lodge at Satpura – the Forsyth Lodge. It is a year or so older than the Reni Pani but it is also very good. I preferred Reni Pani as the cottages are more spread out and you get a greater feeling of living in the wild. Both the campsare fighters for the environment.

I arranged my trip through Chillout365 www.chillout365.com